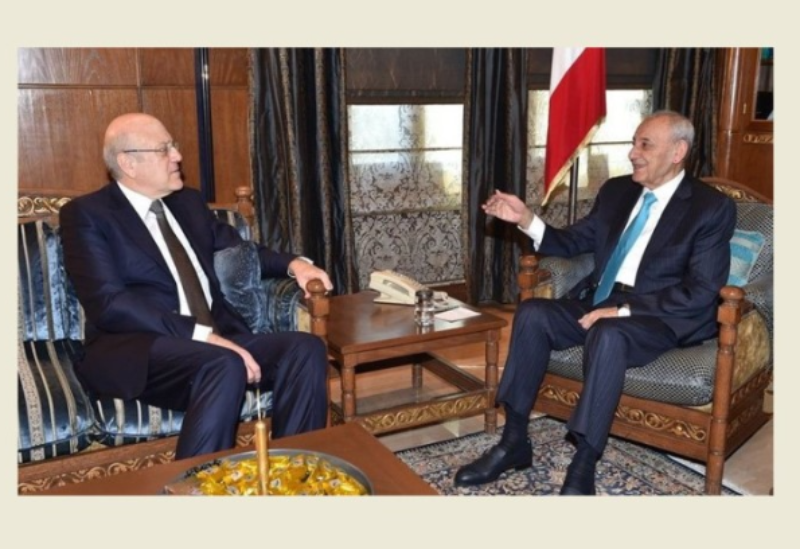 House Speaker, Nabih Berri, on Monday welcomed at his Ain al-Tineh residence, Caretaker Prime Minister Najib Mikati, who briefed him on the general situation and the latest political developments.

Berri then welcomed Danish Ambassador to Lebanon, Merete Juhl, who paid him a farewell visit upon the end of her diplomatic mission in Lebanon.

Berri then welcomed Italian Ambassador to Lebanon, Nicoletta Bombardieri, with whom he reviewed the general situation and bilateral relations between Lebanon and Italy.

The meeting reportedly discussed the general situation and the latest political developments, in addition to legislative matters.

In the wake of the meeting, MP Mark Daou said, “We came as a delegation to meet with House Speaker Berri to discuss the heatedly debated Line 29 and Lebanon’s rights to the exclusive economic zone that is being discussed, especially in line with the arrival of the US negotiator in this file.”

“The House of Parliament has a duty to monitor the government and the executive authority and to carry out accountability, questioning, and to take all the necessary steps,” he added.

On the other hand, Speaker Berri received a phone call from former Iraqi Deputy Prime Minister, Nuri al-Maliki, in which he congratulated him on his re-election as Speaker of the Lebanese Parliament for a new term.