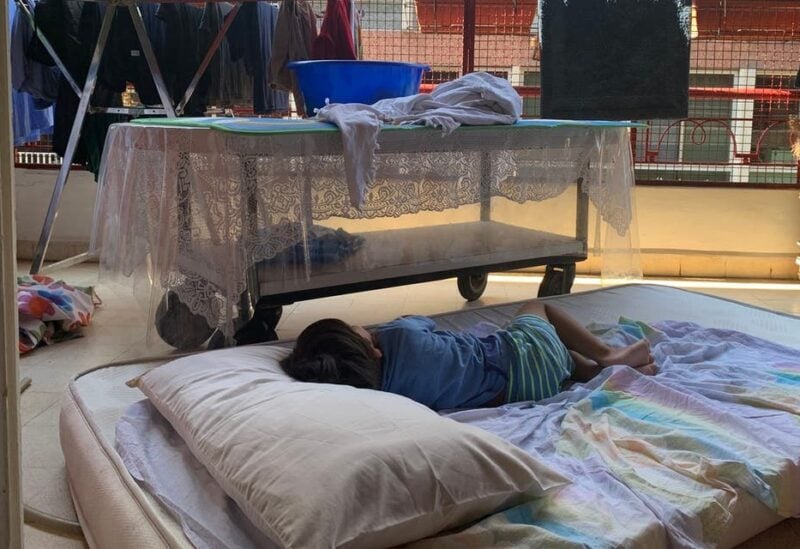 Many people have been grabbing their mattresses and sleeping on their balconies in the hope of catching a night breeze. (Image: Reem Khamis)

High summer temperatures in Lebanon are proving dangerous for a population already tackling multiple crises in their daily lives.

With citizens lacking basic necessities, such as electricity, medicine, water and fuel, the health of many are at risk as temperatures hit up to 40 degrees Celsius, exceeding the usual of a maximum of 32 degrees Celsius for this time of year.

The stress placed on utilities

The heatwave is a burden on an already stretched utilities framework. The significant demand for electricity, and the hefty energy bills are forcing people to push face life with an erratic power supply.

“The heatwave has been particularly unbearable,” George Saoud, a Lebanese expat visiting his family, told Al Arabiya English. “Continuous electricity cuts – disabling us from turning fans or the air conditioner on – are making this heatwave a living hell.”

He claimed that in Beirut, the EDL provides on average two hours of electricity per day while the private generator is not able to close the gap and compensate for power outages.

When reaching for the EDL to get a statement, a customer service employee who wished to remain anonymous clarified that for now the provider won’t be able to increase electricity feeding hours given that various parties of the parliament obstructed the government’s decision to renew the 200 M dollars central bank loan to the EDL to buy the fuel necessary to keep the power plants running.

On the 11th of August, the central bank governor Riad Salemeh released a statement announcing that the country has officially lifted subsidies on fuel.

Abu Yazan who operates a private generator in the Hamra district explained to Al Arabiya English that generator owners are obliged to increase their tariffs because they buy diesel at inflated prices. He also underlined that keeping the generator running all day long increases its maintenance and fuel costs. “This is why we need to rest them for few hours a day,” he noted.

Yazan clarified that the subsidized price for diesel is around 3 million Lebanese pounds per ton, however even before the central bank governor’s decision to lift subsidies “it was almost impossible for us to get our hands on subsidized fuel to meet our demand, we had to buy diesel from the black market which price ranges between 10 and 15 million Lebanese pounds per ton,” he said, adding that the situation is now even more critical.

This leaves some households with no electricity at all for many hours a day.

“Because of the rising fuel prices, in Ras Beirut, we pay 1,000,000 Lebanese pounds per month (almost 1.5 x the minimum wage) for a 5-ampere power generator subscription, to offset for electricity cuts,” Nawal Saliba, a Beirut resident, told Al Arabiya English.

She explained that 5 amperes are not enough to turn on air conditioning, particularly when people need to use fridges and other essential electrical appliances.

“It is not acceptable that, in the 21st century, electricity is considered a luxury that only a few in this country can afford,” Saliba said.

Pediatric Hala Abu Kasm told Al Arabiya English that hot temperatures coupled with continuous electricity cuts is leading to damage of food stored in refrigerators in shops and at homes which led to the spread of food poisoning across the country.

“In the past few weeks many are being admitted to hospitals due to high fever or diarrhea, especially kids and elderlies”.

Dr. Abu Kasm explained that the increased temperatures can have other harmful impacts on health. These include hospital admissions for respiratory and cardiovascular disorders, along with other heat-related illnesses.

She added that the exposure to heat can result in exhaustion, strokes and rashes, and increases the risk of accidents at work, particularly for those working outdoors in the extreme heat.

“This is particularly challenging for Lebanon as covid cases are surging again, hundreds and thousands of doctors and nurses are emigrating from Lebanon seeking better work conditions abroad, and many essential medicines are not found in pharmacies,” she said.

Dr. Abu Kasm added that due to power outages some wards in hospitals are not cooled or properly ventilated, reducing the comfort and wellbeing of patients.

Following the central bank governor’s announcement, Al Makased hospital stated on Thursday the 12th of August that it is no longer able to receive patients. Haroun hospital as well as other hospitals in the Akkar region expressed that they are struggling to find fuel and keep their private generators running and risk closing down their doors.

In light of the situation, people have adapted using different ways to cope.

Jad Saba came to Lebanon for his summer vacation, and told Al Arabiya English that he has been grabbing his mattress and sleeping on the balcony in the hope of catching a night breeze. This has become a common occurrence, as people try to overcome the unbearable situation.

Mariam Khalifeh, a mother of two, said that it is particularly distressing for her family. “I can’t afford to take my kids out and staying at home is unbearable,” she revealed and explained that taking her two kids to a beach resort or a pool to relieve the stress of the summer heat is a burden.

“Beach access became a luxury. The Lebanese coast is predominantly privatized and spending a day at the beach with my children costs me at least 300,000 Lebanese pounds” she said, adding that instead she allows her kids to play with the water hose on the balcony at home.

The Lebanese Agricultural Research Institute (LARI) said the heatwave will continue, while the risk of wildfires remains high.