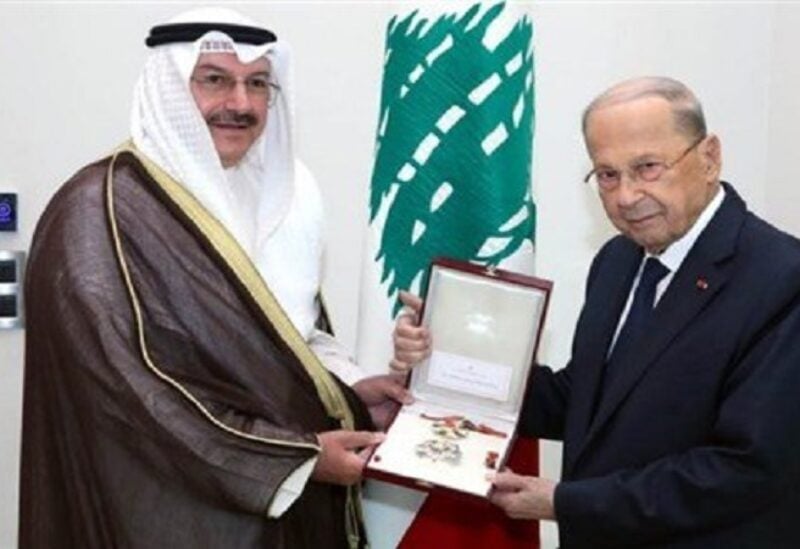 President of the Republic, General Michel Aoun, stressed the depth of the brotherly relations between Lebanon and the State of Kuwait, appreciating the Kuwaiti officials’ permanent support for Lebanon, especially in the difficult circumstances the Lebanese people went through.

The President reiterated that “Lebanon seeks the best relations with the countries of the Gulf Cooperation Council and wishes them continued security, stability and progress”.

Positions of the President came while meeting the Kuwaiti Ambassador to Lebanon, Dr. Abdel-Al Suleiman Al-Qinai, on a farewell visit on the occasion of the end of his 15-year mission in Lebanon.

Ambassador Qinai was awarded the National Cedar Medal of the rank of Senior Officer.

On the occasion, the Director General of Protocol and Public Relations at the Presidency of the Republic, Dr. Nabil Shedid, delivered a speech in which he said:

“At a time when you are preparing to leave Lebanon after 15 years of diplomatic work that was characterized by professionalism, attendance and dedication, and in appreciation of your diplomatic career and your role in consolidating brotherly relations between Lebanon and the State of Kuwait, which witnessed a remarkable development during the past years thanks to your wisdom and constant effort to achieve the best, which left the best impact on Lebanese and Kuwaiti leaderships, and as a token of thanks for what you have provided to the Lebanese people in the humanitarian and social affairs, especially during the difficult circumstances that resulted from the Corona pandemic, for all these facts, His Excellency the President of the Republic, General Michel Aoun, decided to award you the National Cedar Medal of the rank of Senior Officer, wishing you success in your future career”.

For his side, Ambassador Qinai thanked President Aoun for honoring him, wishing Lebanon a better future and an end to the suffering experienced by the Lebanese.

After the meeting, Ambassador Qinai made the following statement

“I was honored to meet with His Excellency, President of the Republic, General Michel Aoun, on a farewell visit that comes after 15 years of service in this brotherly country.

The matters that His Excellency wanted to follow up personally and authorized me and assigned me to follow up on them upon my return to Kuwait, which are issues of concern to the two brotherly countries. I will convey the desire of His Excellency in all honesty and sincerity to his brother, His Highness the Emir and to the Kuwaiti leadership. The President also honored me by awarding me the National Cedar Medal of the rank of Senior Officer, and I was honored to receive this Medal, which truly expresses the authenticity, strength and depth of the relations between the two brotherly countries, which set an example to be emulated between countries.

In response to a question, Ambassador Qinai revealed that a new Kuwaiti Ambassador will be appointed in Lebanon as soon as the diplomatic formations conducted by Kuwaiti Foreign Minister Sheikh Dr. Nasser Muhammad Al-Sabah are completed.

I was informed by Middle East Airlines and Kuwait Airways that, starting from next month, more flights will be added to Lebanon due to the high demand for them from tourists”.

Ambassador Qinai denied the existence of any ban on Kuwaitis from coming to Lebanon, explaining that security warnings had previously been issued in immediate circumstances. These conditions have passed, and “God willing, as I have said and always say, all our best wishes to this brotherly country for security, safety and stability, and it is the first tourist destination for all Gulf countries and Arab countries. God willing, it will be a promising and bright summer in terms of tourism as well as in terms of security”.