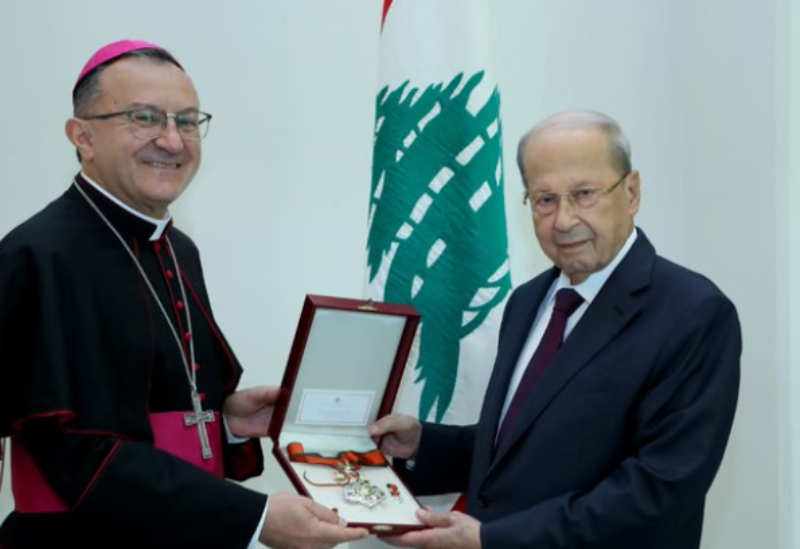 Monsignor Joseph Spitry, the papal envoy to Lebanon, declared that “His Holiness Pope Francis and the Holy See are close to Lebanon as well as to the Lebanese men and women.”

In addition to the work done by Caritas-Lebanon and other organizations, Monsignor Spitri noted that “the Holy See will continue to help Lebanon, especially through Catholic relief agencies, and has boosted its assistance, especially in recent years.”

The papal ambassador’s speech came after meeting with President of the Republic, General Michel Aoun, this morning at Baabda Palace, on a farewell visit after the end of his mission in Lebanon, and before moving to his new workplace, as ambassador of the Holy See in Mexico.

Spitri said “I thank God for giving me the opportunity to be with you, here, in the land of the cedars. I hope to return to Lebanon again”.

For his part, the President thanked the papal ambassador for the efforts he made during his mission in Lebanon, especially in recent years that were filled with major challenges, wishing him success in his new mission. The President hoped that Spitri would keep Lebanon in his heart and prayers.

President Aoun also reviewed the bilateral relations between Lebanon and the Holy See, thanking the Pope Francis for his constant interest in Lebanon and his care for the Lebanese people, which were finally embodied in the appeal he made to the world for Lebanon, at the conclusion of the general meeting he held in Vatican City, last Wednesday.

Moreover, the President assured Ambassador Spitri that what unites Lebanon and the Holy See is friendship, faith and common values that have been strengthened over the centuries, right up to today.

“Lebanon always finds the Holy See at its side, in the difficult circumstances it is going through, and this is a cause for gratitude and thanks from all the Lebanese” President Aoun said.

On this occasion, and in appreciation of his efforts, the President granted the Papal Ambassador the National Order of the Cedar at the rank of Senior Officer.

For his part, the Director General of Protocol and Public Relations at the Presidency of the Republic, Dr. Nabil Shedid, read out a speech in which he said:

“We are meeting today to honor your Excellency for your contribution to the development of relations between the Holy See and Lebanon.

It is an official ceremony to award the National Cedar Order of the rank of a senior officer to those who contributed to spreading the values that unite us.

This celebration is also a moment of friendship and an opportunity to reaffirm the strength of the relations between the Holy See and Lebanon that go back to the time of Christ, to which you contributed so eminently through your tireless commitment.

For all these reasons, His Excellency the President of the Republic, General Michel Aoun, decided to award you the National Cedar Medal at the rank of Senior Officer.  His Excellency hopes that you will always carry, wherever you are, especially in Mexico, where you will find a vibrant Lebanese community, a Lebanese horizon that is inseparable from the horizon of the Holy See.

After the meeting, Ambassador Spitri made the following statement:

“I have come to salute His Excellency the President of the Republic, with the end of my service in Lebanon, this beloved land. I wanted to express to him my gratitude for the four years I spent here, despite all the challenges.

We lived through very difficult times here, and I simply wanted to renew to His Excellency the proximity of His Holiness Pope Francis and the Holy See from Lebanon, as well as from the Lebanese men and women. We will continue to help this country, especially through Catholic relief agencies, and we have doubled our assistance, especially in recent years for hospitals and schools, in addition to the activities of Caritas-Lebanon and other institutions.

I thank God for giving me the opportunity to be with you, here, in the land of the cedars, and I hope to return to Lebanon again. I would like to thank His Excellency the President for the high medal he bestowed on me, and I will keep a special image of Lebanon in my heart”.

President Aoun met, in the presence of former Minister Gabi Lyon, Archbishop of Zahle and Baalbek, Archbishop Antonios al-Souri, and discussed with him general national affairs.

The meeting also addressed the necessity of supporting the Lebanese industry, facilitating agricultural production and setting up Zahle’s electricity.

The President received Lebanon’s Ambassador to Canada, Fadi Ziadeh, in the presence of the diplomatic advisor to the presidency, Osama Khashab.

Ambassador Ziadeh briefed President Aoun on the situation of the Lebanese community in Canada and on the Lebanese-Canadian relations and ways to develop them in all fields.

In addition, Ambassador Ziadeh affirmed the Lebanese people in Canada’s attachment to their motherland, and their constant work to help their families in Lebanon to overcome the delicate stage the country is currently going through.

Finally, Ambassador Ziadeh noted the solidarity of the Lebanese community in Canada and their cooperation to serve their country and stand for its children.