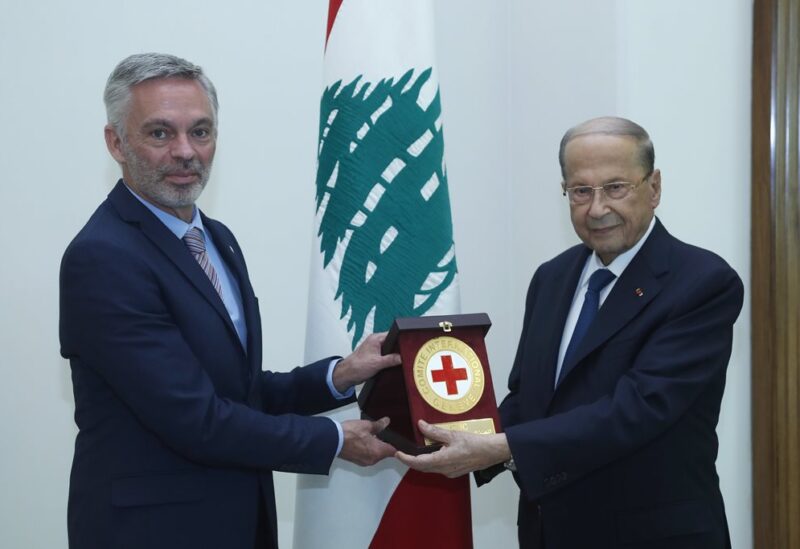 President of the Republic, General Michel Aoun, praised the Red Cross International Committee’s distinguished humanitarian position in countries suffering security disruptions, as well as the sacrifices made by its staff to complete delicate tasks.

The Head of the International Committee of the Red Cross, Mr. Christophe Martin, was received at Baabda Palace today on a visit to mark the end of his duties in Lebanon and his move to Syria to assume the chairmanship of the mission.

During the meeting, President Aoun expressed gratitude to Mr. Martin’s efforts in Lebanon over the last four years, especially in easing the burden of crises the country has faced, particularly in relation to the Syrian displacement crisis, the economic and social crisis, the Corona outbreak, and the Beirut Port explosion, where the mission provided immediate assistance to relief teams.

The President also praised the existing coordination and cooperation between the Red Cross International Committee and the Lebanese Red Cross, which contributed to the organization of relief operations and the recovery of the injured and other tasks carried out by Lebanese Red Cross volunteers.

Mr. Martin thanked the President for his cooperation with leaders, organizations, official administrations, the Lebanese Red Cross, its Chairman, Dr. Zoghbi, and Secretary-General, Mr. George Kettaneh, during his visit to Lebanon. Mr. Martin also wished for Lebanon’s success in overcoming the challenges it is facing.

Finally, Mr. Martin presented President Aoun with the International Red Cross shield, which he received in exchange for the Presidency of the Republic emblem as a sign of appreciation and gratitude.