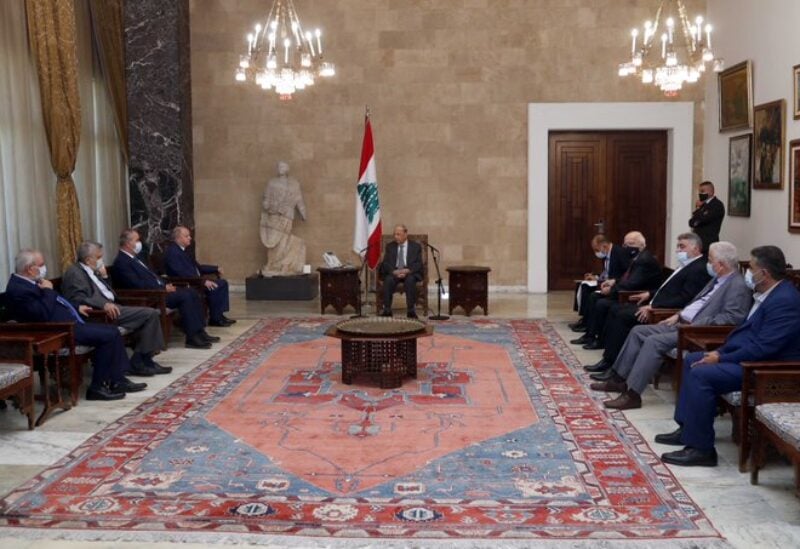 President of the Republic, General Michel Aoun, emphasized that “We aren’t afraid of collapse. Rather, we are now engaged in the battle to emerge the abyss we are in, and we hope for success”.

“We will exert every effort to achieve this goal, and we having nothing but this great concern which surpasses every normal situation” President Aoun said.

“We hope that very soon, after the formation of the government, that we will initiate talks with the International Monetary Fund and World Bank for financing, as there is an international will to help us. Every citizen should help the state in these delicate circumstances” the President added.

“I suffer from everything which the Lebanese workers suffer from. I am like you in your cry for your rights from the banks and for various needs. Even though I am in this palace, I suffer just like you” President Aoun stressed.

Stances of President Aoun came while meeting a delegation from the General Labor Union headed by, Beshara Al-Asmar, today at Baabda Palace.

The delegation came to congratulate the President on the formation of the new government and to discuss with him the difficult economic conditions which Lebanon is experiencing, in addition to the ways to exit this situation.

“After the formation of the government, it was essential that our first visit is to your Excellency, to brief you of the labor movement and the Lebanese people who are suffering greatly from the scarcity of fuel, in addition to the crises of foodstuffs, medicines, hospitals, guarantee and public institutions.

The government should move as quickly as possible to heal the wounds of the Lebanese, and to reach a minimum level of economic stability which will help us begin to rise. Lebanon today is in deep need of a renaissance, and the cooperation of all its citizens, so cooperation with ministers is a duty. The government should be given time to start its work in order to protect institutions which collapse one after the other.

As for the financing card, we insist on implementing this plan which provides around 40% of the individual economic income. We also hope that the treatment of the medicines’ crisis would be swift, the electricity problem be solved and immigration will end.

All these issues were the result of wrong financial and economic policies which have been adopted for decades. We, as a General Labor Union, insist on the rule of law and the judiciary, combatting corruption and forensic audit. The forensic audit must include all institutions, from the Central Bank to banks and municipalities, to hold the responsible accountable”.

Al-Asmar then thanked President Aoun for signing the two decrees related to transportation in both public and private sectors.

The President welcomed the delegation and indicated that he has “Always stressed the necessity of making a change in the nature of the Lebanese economy from rentier to productive, until we reached the current crisis”.

“This position for me is not new. I was the first to call for it through a television interview back in year 1998. I also warned that we would reach a difficult stage for which depositors would pay. Today we have reached this situation, and recalling what we have warned about is no longer useful. Forensic audit is important, and it will determine the reasons which led us to where we are today, in addition to determining all responsibilities” President Aoun said.

“Required needs are unlimited, numerous and present in various sectors. Therefore, one of the priorities of the plan which I presented to the international references concerned with helping us is based firstly on fighting poverty. This goes hand to hand with the stability of national currency, whose exchange rate must be naturally fixed. And then we will start with the major projects, the priority of which is the energy which is needed for every home, especially in terms of establishing electricity production stations, leading to the building of a modern state, in cooperation between both public and private sectors” the President continued.

The President also considered that “The reconstruction and balanced development program is large and creates job opportunities. It includes projects which go together, including electricity and the reconstruction of the Port, which is our gateway to the world, and feeds the treasury and budget, reaching the hospital sector and others, where it is necessary to address all weaknesses sequentially. The economic situation will be our main priority”.

“After the formation of the government, we are in front of an economic workshop. This is our first concern since we want our children to stay here in our land, hence reducing immigration. Immigration is affecting all Lebanese segments. We will also address this situation so that the immigrated return” President Aoun concluded.

Head of the Association of Banks:

The President met the head of the Lebanese Banks Association, Dr. Salim Sfeir, who was accompanied by his advisor, Mr. Antoine Habib, and lawyer, Sakhr Al-Hashem.

The banking situation and role of banks in the phase of rebuilding the Lebanese economy were addressed.

After the meeting, Sfeir stated that “The association expressed its satisfaction with the formation of the new government. Banks are ready to participate in all steps which would promote Lebanon’s economy again after the previous crisis”.