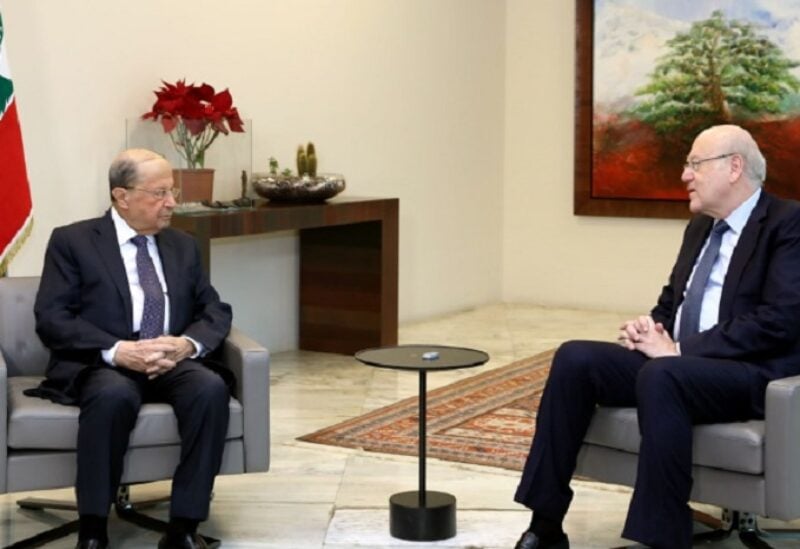 President of the Republic, General Michel Aoun, met Prime Minister, Najib Mikati, today at Baabda Palace, and discussed with him general conditions and the atmosphere of the Cabinet’s discussions of the draft budget law for the year 2022, in addition to the electricity file and the necessity of taking steps that determine its course definitively and clearly.

After the meeting, PM Mikati made the following statement:

“I met His Excellency the President and briefed him on the atmosphere that prevailed in recent days, in terms of discussing the draft budget within the Council of Ministers and finalizing it in the next session, God willing, in preparation for submitting it to the Parliament in its final form.

We agreed to hold a Cabinet session next Thursday in Baabda Palace at 2:00 pm, provided that the Cabinet will finish studying the budget on the same day, even if the session took hours.

I conveyed to President Aoun, greetings from the Turkish President and his keenness on the best relations with Lebanon, and in view of the accumulated issues that must be studied in the Council of Ministers, I informed the President of my invitation to the Council to convene next Tuesday in the Grand Serail to take the appropriate decisions.

Question: Will there be an electricity advance?

Answer: “His Excellency the President has put this issue into consideration as well, and in principle, the electricity advance will be outside the budget sent to the Parliament. We must adopt either the presence of electricity permanently or not, so it is a partial solution and giving an advance every time, similar to what happened during the past thirty years is something that the ministers oppose, as we need a complete and clear plan for electricity through which we know when it will be available 24 hours a day, and what our situation is at the moment. The Council of Ministers will send the electricity issue through a separate bill to the Parliament”.