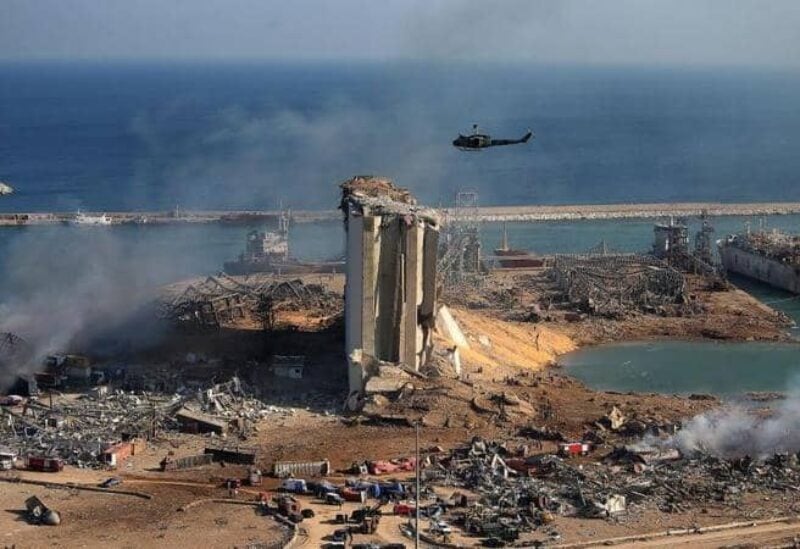 FILE PHOTO: A picture shows damages at the site of the explosion that shook Beirut's port area on August 4, 2020.

Early last August, residents near the Lebanese port of Beirut watched in horror as one of the largest non-nuclear, human-caused explosions on record tore a chunk out of their city, leaving more than 200 dead, thousands injured, and hundreds of thousands homeless.

The explosion’s shock was felt around the globe – sensors as far away as Tunisia and Germany picked up the deep rumble, and seismic stations almost 500 kilometers (just over 300 miles) away recorded its tremor.

Now it turns out the port blast caused the highest layers of the atmosphere to shake, and the resulting data could inform future efforts to keep an eye on weapons testing conducted by rogue states.

Researchers from India’s National Institute of Technology, Rourkela, and Hokkaido University in Japan measured electrical disturbances in the ionosphere, finding the explosion was comparable to the impact of several eruptions of volcanoes.

“We found that the explosion generated a wave that traveled in the ionosphere in a southwards direction at a velocity of nearly 0.8 kilometers per second,” says Kosuke Heki, an Earth and planetary scientist from Hokkaido University.

Commencing around 50 kilometers (about 30 miles) overhead, and stretching into space hundreds of kilometers away, the ionosphere is characterized by high numbers of free-roaming electrons that get booted from gas molecules by solar radiation.

The team used variations in phases within microwave transmissions sent by the Global Navigation Satellite System (GNSS) on the day of the blast to calculate changes in the distributions of the electrons, which in turn indicated the presence of acoustic waves through the gases.

It’s a kind of trick that scientists have been using since the advent of such satellite networks in the 1990s, measuring ripples sweeping through the upper reaches of our atmosphere in a bid to note subtle signatures of anything from volcanoes to rogue nuclear testing.

One of the first experimental forays into using global positioning satellite (GPS) technology to measure surface explosions occurred in the mid-1990s, as scientists took advantage of 3 massive underground explosions at a coal mine in Wyoming, USA to examine how the ionosphere responded.

Yet finding the faint traces of the Beirut blast in this instance wasn’t without a small amount of luck. With the event taking place early in the evening and close to sundown, ionosphere irregularities called equatorial plasma bubbles might have masked the signal altogether.

Fortunately, there were no signs of these bubbles at the time, giving the scientists a relatively clear image of the explosion’s wash slipping through the upper atmosphere at the speed of sound.

The researchers compared the impact of the Beirut blast on the ionosphere with similar scars left by some recent volcanic eruptions in Japan, finding it more or less comparable. In the case were the Asama Volcano in central Japan erupted in 2004, the Beirut explosion was far more impactful.

Though slightly weaker than the 1.5 kiloton explosions examined all those decades ago in the Wyoming mine, the fact this blast was exposed on Earth’s surface gave it an unimpeded path towards the sky, with a release of energy obviously evident in the data.

It became known now that it took 2,700 tons of ammonium nitrate to generate what’s calculated to be equivalent to the detonation of 1.1 kilotons of TNT, putting it in the ballpark of a low-yield nuclear bomb.

The ability for countries, like Iran and North Korea, to move forward with nuclear armament plans remains a matter of concern for long-term global peace, so having a number of clever ways to keep an ear out for testing programs wouldn’t go astray.