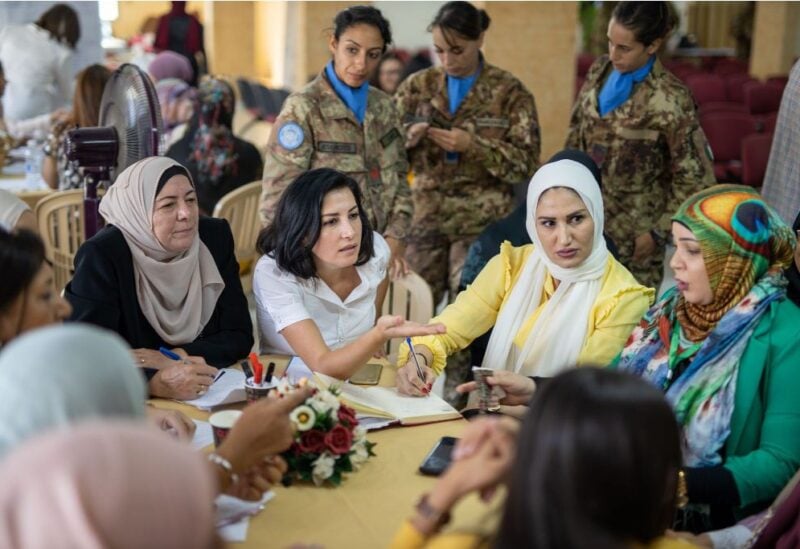 Over one hundred women across three mediation networks in Lebanon are prepared and working to address community tensions and conflicts, supported by UN Women through its project, “Fostering Stabilization and Social Cohesion in Lebanon through Women’s Engagement in Conflict Prevention and Management.”

Launched in May 2019, the recently concluded project was made possible through the generous contributions of the Rebecca Dykes Foundation (RDF), which was established following the tragic death of British Embassy worker, Rebecca Dykes, in December 2017 in Lebanon.

Through the support from the RDF, UN Women sought to support women to identify and prevent community conflict and disputes, and to manage tensions within their communities.

UN Women, in partnership with the Centre for Professional Mediation at the University of Saint Joseph (CPM-USJ), supported the formation of three women’s mediation networks in Tyre, Abbassiyeh, and in the Palestinian refugee camp of Ein El Helweh, in South Lebanon. Through these networks, female community leaders received accredited training on active listening, dialogue and dispute resolution, and were supported to identify potential conflicts and tensions in which they could engage and apply their learning, in partnership with other community leaders. The trainings provided were also extended to women from the Shatila and Burj al Barajneh camps in Beirut.

As one example of their work, in March 2020, a group of the trained community mediators engaged with students between the ages of 10 and 13 from the Southern Amelieh School, in South Lebanon to address issues of school violence. Bringing teachers, parents and students together, they used formats such as role play, games and discussion to emphasis tools of non-violent communication, and to facilitate a discussion between parents and teachers. Another group, during the COVID-19 pandemic lockdown in Lebanon, worked closely with the Municipality of Abbassiyeh to identify and diffuse intra-household tensions, to try and mitigate the increasing rates of violence against women. Women from the networks also worked to apply their skills to mediate an intra-communal conflict over land use and formed a Diwan al Wasata (Mediation Council) to inform their communities about conflict prevention and to serve as a listening center for people on community concerns and disputes.

Ms. Rachel Dore-Weeks, Head of UN Women in Lebanon, said, “UN Women owes enormous gratitude to Rebecca’s family and friends through RDF for supporting us to pilot this important work in South Lebanon and in Palestinian communities, which has impacted women’s lives in immeasurable ways. This work goes a small way to supporting violence prevention, and to bolstering dialogue as the agreed mechanisms for addressing disputes and tensons.”

Ms. Johanna Bourjeily, Director of the Centre for Professional Mediation, said “Our mission is to equip these women so that they can partake in amiable management of conflicts, yet more importantly, we were keen on accompanying them on a personal transformative path. We hope they shall lead by example and become agents of peace at the heart of their families and communities.”

Women’s engagement in peace and security on both the community and national level is essential to building sustainable peace in Lebanon. To date, women have largely been excluded from the country’s peace and security architecture. For example, women were not engaged in the 1989 Taif Accords that brought the civil war to an end in 1990 or in subsequent national dialogues and remain underrepresented in national security institutions.

UN Women has been working to support the Government of Lebanon, through the National Commission for Lebanese Women, and academic and civil society partners in the passage and implementation of country’s National Action Plan on UN Security Council Resolution (UNSCR) 1325, which aims to increase the participation of women in decision-making processes at all levels, providing a critical framework for long-lasting peace and stability in Lebanon. UN Women has been leading UN efforts in the country to ensure women’s engagement in national peace and security deliberations, in partnership with a range of UN, government and civil society partners.

This project takes place in the context of UN Women’s support to the implementation of Lebanon NAP 1325 complimented through targeted work on mediation and non-violent conflict resolution that focuses on both the community and national level. In 2021, UN Women is working to expand this work to other regions of the country, with generous support from the Government of Finland, as an urgent priority with Lebanon facing increased tensions in addition to economic and political insecurities.