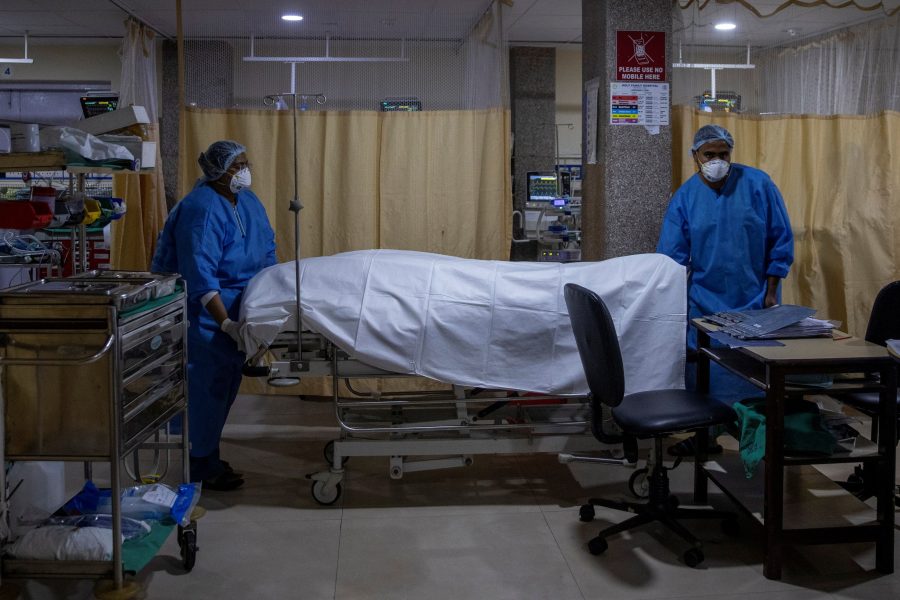 Hospital workers remove the body of a person, who died from the coronavirus disease (COVID-19), from the ICU ward at Holy Family Hospital in New Delhi, India, April 29, 2021. REUTERS/Danish Siddiqui

Coronavirus is mutating fast, with new variants being detected daily as the virus replicates multiple times within one infected individual. At the moment, the Delta variant first detected in India in October 2020 is on its way to assume global dominance due to its rapid spread.

The case of a 90-year-old woman who died after getting infected with two COVID-19 variants of is raising new questions about the rare phenomenon of double infection, as well as about vaccine effectiveness, according to a Bloomberg report which follows a revelation from Belgian researchers.

The research paper, presented at the European Congress of Clinical Microbiology & Infectious Diseases this week, revealed that the woman in question died at the OLV Hospital in the Belgian city of Aalst in March.

The woman, who wasn’t vaccinated, lived alone and was receiving at-home nursing care. She was admitted to hospital with good oxygen levels but died five days as her respiratory symptoms worsened rapidly. Tests found that she was infected with two COVID-19 strains – the alpha variant that was first detected in the UK and the beta strain found in South Africa.

“Both these variants were circulating in Belgium at the time, so it is likely that the lady was co-infected with different viruses from two different people,” said Anne Vankeerberghen, a molecular biologist from the OLV Hospital who was leading the research.

According to the biologist, the global occurrence of this phenomenon of double infection was “probably underestimated” because of “limited testing for variants of concern and the lack of a simple way to identify co-infections with whole genome sequencing”.

The case is poising questions about how effective vaccines can be against multiple COVID-19 variants co-existing in one individual. The Delta variant, first detected in India in October 2020, is currently seen globally as a primary variant of concern due to its contagious nature. It is spreading some 225% faster than the original version of SARS-CoV-2 and is now dominating outbreaks in the UK and the US. Double-vaccinated people are still believed to be protected from the need for hospitalization and severe illnesses caused by this variant, but there are more questions about other mutations, especially with Lambda variant, first detected in Peru, now making headlines as WHO-designated “variant of interest”.