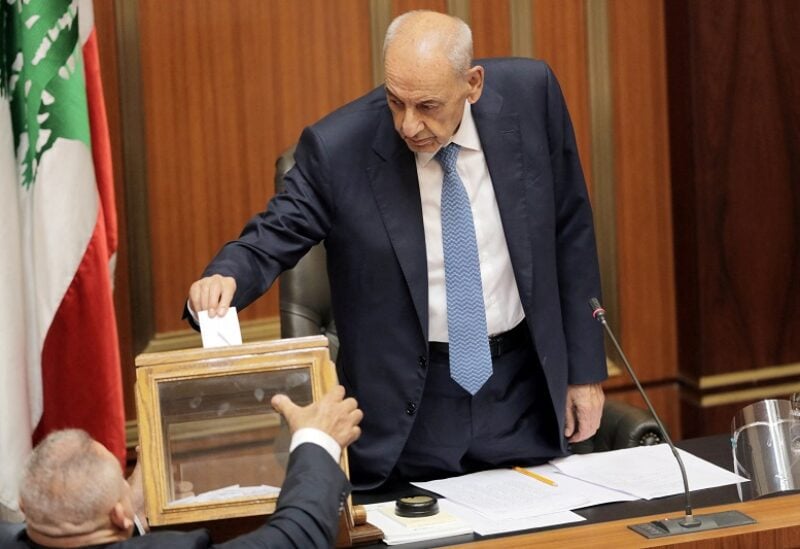 Lebanese Parliament Speaker Nabih Berri casts his vote as Lebanon's newly elected parliament convenes for the first time to elect a speaker and deputy speaker, in Beirut, Lebanon May 31, 2022. Lebanese Parliament/Handout via REUTERS ATTENTION EDITORS - THIS IMAGE WAS PROVIDED BY A THIRD PARTY. NO RESALES. NO ARCHIVES

A lot was circulated about deals between the Shiite duo and the Free Patriotic Movement, prior to the Parliament Speaker’s elections, and consequently, voices rose about an understanding that took place under the auspices of Hezbollah, to secure the victory of Nabih Berri as Speaker of Parliament.

As days went by, between the denial of the Free Patriotic Movement on the one hand, and Ain al-Tineh’s statements that it is not interested in any bartering on the other hand, Berri won his seventh term, but how?

Shiite duo’s sources confirmed that everything that is being said about a deal is incorrect, but there is an understanding that occurred between the trio, Hezbollah, Amal Movement and the Free Patriotic Movement, as they are in the same line, on a complete basket that includes securing victory for Berri, and that was prior to the parliamentary elections when the party stipulated that Bassil contribute to securing votes for Nabih Berri, in exchange for persuading the latter to ally with the Free Patriotic Movement in the areas of influence of the Shiite duo, and this is a normal thing that happens in any elections because everyone wants the best result.

Same sources continued via “Sawt Beirut International”, that “Basil’s acceptance of the agreement does not mean that he submitted to Berri’s conditions, as he wants to obtain the largest number of deputies, in order to ensure that no Shiite figure is nominated for the presidency of the House of Representatives, in return, Basil obtained in the duo’s areas a number of representatives to compensate him for his loss in the Christian areas.”

As for the issue of the presidency of the House of Representatives, Bassil pledged from the beginning, that if the Free Patriotic Movement felt that Berri needed his votes, he would support him with a number of votes that would allow him to win the battle, no more or less, to avoid embarrassment within his Christian environment, and in fact, Basil secured the number of votes needed for Berri to win.

The sources added, in turn, Berri expressed his non-opposition to any candidate for the Presidency of the House of Representatives proposed by Basil, because the stage requires the efforts of all in order to raise Lebanon from the abyss.

The sources hoped that cooperation between Amal and the Free Patriotic Movement would continue, because the situation does not bear contradictions, and we have a lot of work to do in Parliament, and the rest of the parliamentary blocs should make maximum efforts to achieve political, economic and social rescue.