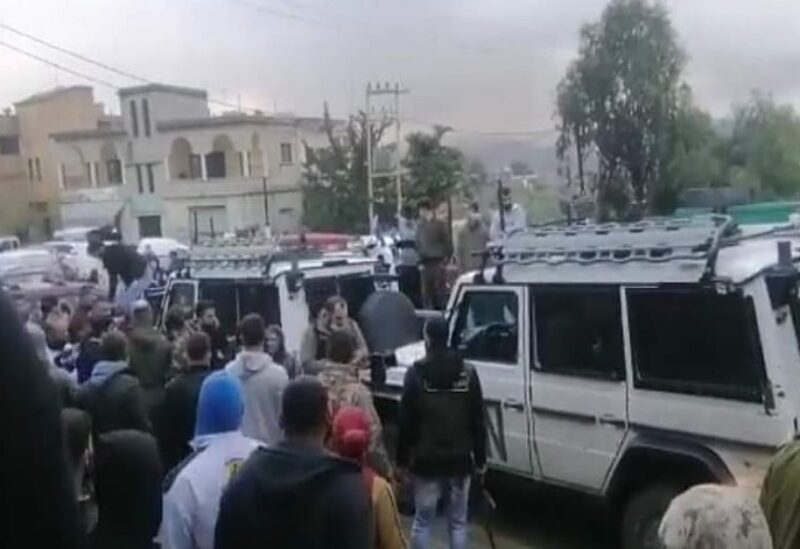 Restricting the international emergency forces, is one of the tools, Hezbollah uses, to send messages to the international community and the United Nations, but this “use” is not done directly, meaning that Hezbollah does not “appear” on the stage, but rather hides behind the “people”.
This is what happened in the latest chapters of the play:

United Nations Secretary-General Antonio Guterres visited Lebanon and toured the south, and the most prominent stance he took, was “inviting Hezbollah to be a political party.”

Certainly, Hezbollah resented this situation, so the response came in the southern town of Shaqra, where a UNIFIL patrol was attacked. (The accident happened with the Finnish battalion of the United Nations Interim Force, “UNIFIL” in conjunction with the departure of the United Nations Secretary-General Antonio Guterres from Lebanon.) One of the patrol cars was smashed, wounding one of its members.
The “accusation” is ready in advance: “espionage.” The attack was accompanied by the distribution of news that the patrol was spying on Hezbollah websites, and that some of its members were filming with their cell phones!

The response came through the Deputy Director of the UNIFIL Information Office, Candice Ardell, who considered that “depriving UNIFIL from freedom of movement and attacking those who serve the cause of peace, is unacceptable and a violation of the Status of International Forces Agreement signed by Lebanon.”

Noting that the town of Shaqra, where the attack took place, is geographically included in Resolution 1701, where UNIFIL forces have freedom of movement among the provisions of the resolution.

Hezbollah sent a “violent” message to the United Nations, knowing for sure that spying does not take place by filming with cell phones in front of the “people”, as if the emergency forces were acting naively to say: “They watched us spying!” It is as if Hezbollah has not heard of radars, satellites and the latest spying techniques, and it is full aware of them!

But where is the Lebanese authority’s stance regarding this attack?

“Cries” as usual, and “tears of sorrow and regret”:

Prime Minister Najib Mikati contacted the Minister of Foreign Affairs and Emigrants, Dr. Abdullah Bou Habib, and a statement from the Ministry of Foreign Affairs was issued, about “not accepting any form of aggression against the UNIFIL forces, stressing the safety and security of its members and mechanisms, and Lebanon’s continued commitment to relevant international resolutions, especially Resolution 1701.” .

But is “statements diplomacy” enough?